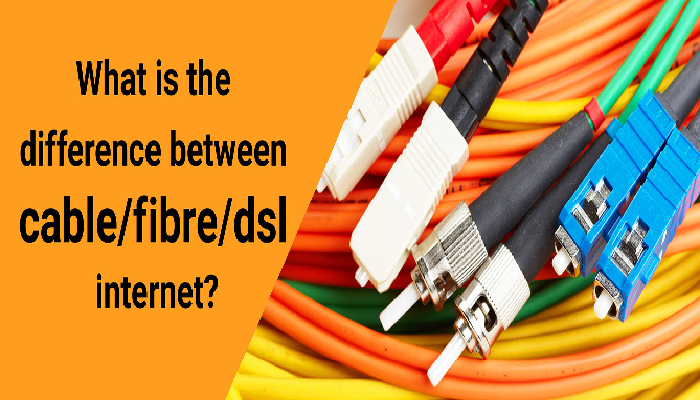 Shopping around for the best internet provider and internet plan for your family? The type of internet you will choose matters and will determine how fast your internet is and how reliable you can expect it to be. From cable to fiber optic and DSL internet; these internet types can get confusing fast if you’re not familiar with the terminology or technology behind how they work. To make matters even more confusing, many internet providers aren’t very forthcoming about what type of internet they’re offering you.

To avoid getting stuck with slower, less reliable internet than you need or expect to receive, here’s the big three and their differences. After reading this guide, you’ll understand what internet types are out there so you can make the very best decision for your family.

Cable internet is the most common internet type you’ll find available in suburban and urban areas. In fact, cable internet services the majority of the country because it’s already installed in most homes from cable TV’s heyday. Cable internet uses those same copper coaxial cables to transmit the internet but does have its limitations because these cables weren’t created with the internet in mind. While cable internet is vastly superior to DSL because of its increased internet speeds and wider bandwidth, it can’t compete well with what fiber has to offer.

Possible Cable Internet Providers Near You

With cable internet, you can expect internet speeds from 10 to 500 Mbps. However, internet speeds will vary based on where you live. Some internet providers like Optimum use a hybrid of cable and fiber technologies to deliver your internet to their customers at higher speeds. This works by select internet providers using fiber-optic lines to deliver data to your neighborhood hub or curb and then is distributed to individual homes using copper coaxial cables.

Fiber optic internet is increasingly growing in popularity and is most commonly found in urban areas and metropolitan cities. Fiber internet uses fiber-optic lines that are made of thin strands of glass that are bundled together. The glass stands allow data to be sent back and forth at the speed of light, delivering far superior internet speeds than any other internet type or technology available today. Since fiber internet is a newer type of internet, it requires internet providers to build out the infrastructure to support it. Expanding into new areas is costly and can take a few years to go from construction to fully operational.

With fiber internet, you can expect internet speeds from 200 Mbps to 2000 Mbps. Reaching top speeds over 940 Mbps or 1 Gig is unusual today, but availability is slowly increasing. You can also expect faster upload speeds, lower latency, and greater service reliability. However, there are different types of fiber internet on the market. There’s fiber to the home that delivers 100% fiber internet to your home. Other providers use a hybrid of fiber and cable technologies to deliver better than average internet speeds to your home but won’t achieve the top speeds that full 100% fiber can. Hybrid connections work by using fiber-optic lines to deliver data to your neighborhood, curb or network node and from there it’s delivered by cable in what industry experts call the “last mile.”

DSL is an abbreviation for digital subscriber line and this internet type is most commonly used in underserved rural areas across the country as a cheaper solution to satellite internet, but also a much faster solution than dial-up. With DSL your internet is delivered to you through your telephone lines but is not dial-up internet. Contrary to dial-up, it won’t tie up your phone lines while you’re on the internet and doesn’t require you to dial in to start using it.

Possible DSL Internet Providers Near You

With DSL internet, you can expect internet speeds from 1 Mbps to approximately 100 Mbps. Reaching 100 Mbps for DSL internet is unusual, but some providers do it by using a hybrid of fiber optic and DSL technologies to achieve faster than normal DSL speeds. This works by select internet providers using fiber-optic lines to deliver data to your neighborhood hub and then from there it is distributed to individual homes. There’s a speed loss from fiber to DSL and even more, decreased speeds the farther away you are from your neighborhood hub.

4 Tips to Protect Your Business From Ransomware

How to jailbreak iphone 6

How to screenshot on hp laptop